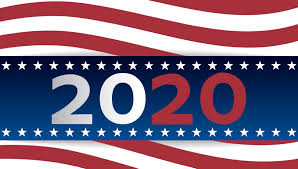 11/10/20: What a difference a week makes…After the highs and lows of the campaign of the century we have elected a president…or have we?

Technically what occurred last Tuesday was that we the people submitted ballots which will be then certified by the individual states, whose delegates make their selection on the 14th December when the electoral college meets. This process is not determined by FB, Twitter, NBC, CBS, CNN, Fox, etc. etc. It’s what mandated and codified by the US constitution. ( https://www.archives.gov/files/electoral-college/state-officials/presidential-election-brochure.pdf)

What’s stunning about this `final deadline date’ to legitimize a president is that a solar eclipse will be positioned right on the USA’s rising sign (identity and persona) in the sign of Sagittarius. 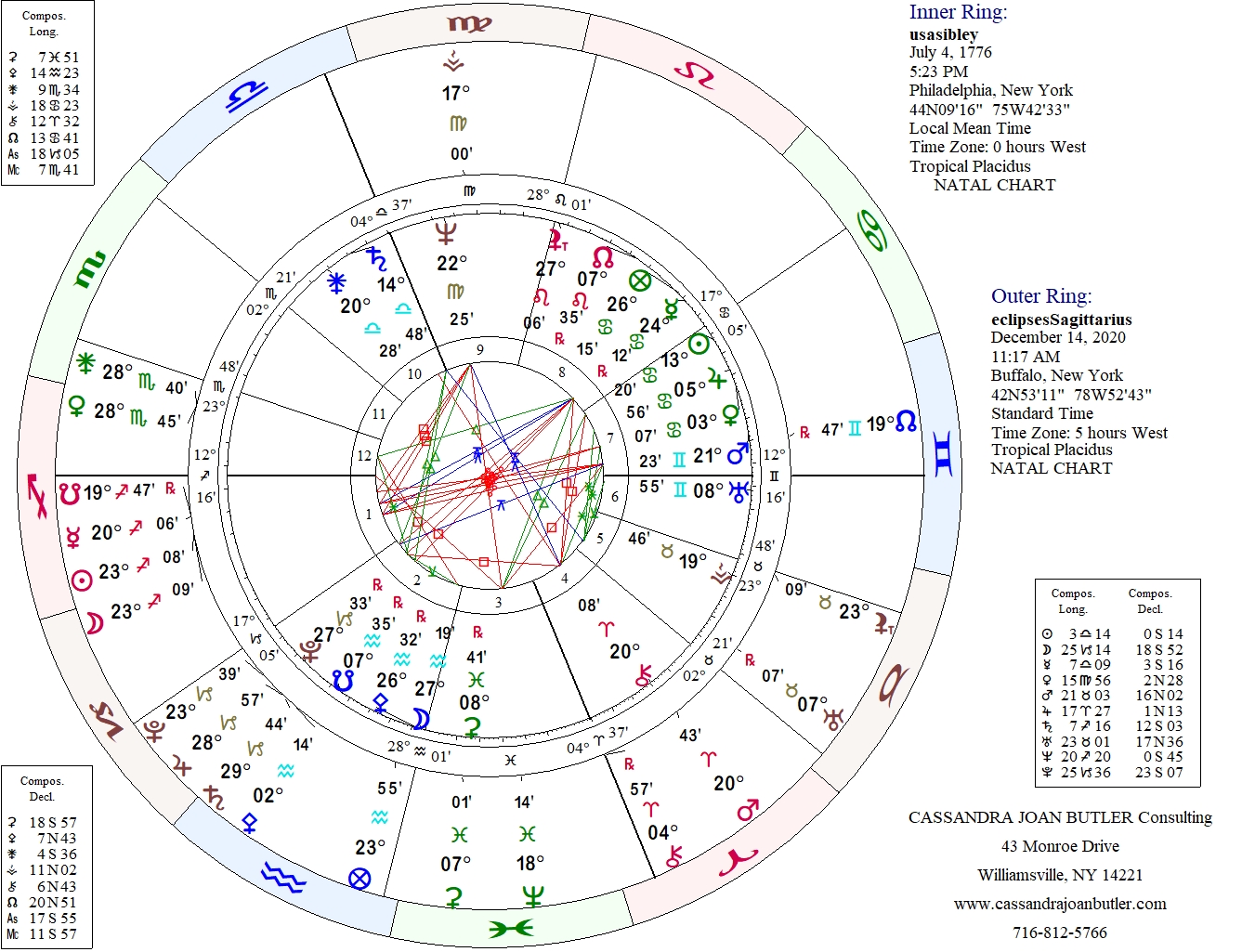 Consider the following:  1) Eclipses signifies unexpected events. In other words, expect the electoral college to conclude with a most unusual result; 2) The degree of the eclipses EXACTLY inconjuncts Black Moon Lilith. BML is the energy of the powerful outsider who fiercely destroys that which she can not possess. BML also works in the shadows; 3) Mars EXACTLY conjuncts Chiron in the US chart, which blends the warring energy of mars with opening up the deepest wound within the nation.

As of this writing not one state has certified. AG Barr has moved forward with a massive investigation into alleged voter fraud. You’ve heard the allegations sworn by countless witnesses who claim; voter machine glitches (switching ballots from President Trump to former Vice President Biden); dead people voting, ballot harvesting, coercion to vote democrat, instructions to `back date’ mail in ballots.

Here are references relative to the above paragraph regarding the allegations:

The uncertainty over the election and subsequent investigations is triggering an underlying sense of dread, controlled anger and a deepening of division and mistrust among the electorate. Among Republicans the skepticism concerning the election results is seventy percent: (https://www.politico.com/news/2020/11/09/republicans-free-fair-elections-435488_)

Meanwhile, many Democrats are pressuring the Republican powers-that-be to accept the elections’ results. Whoopi Goldberg, of the View commented, ‘Suck it up.’ ( https://www.independent.co.uk/arts-entertainment/tv/news/whoopi-goldberg-trump-the-view-joe-biden-president-b1719934.html)

The underlying sense of dread we are ALL feeling over the uncertainties of the election can be summed up by two words; Mars retrograde. The planet of war will, ego, and power has been retrograding since September ninth. It feels as if we can’t `just relax’ and get on with our lives….unless and until we know beyond a shadow of a doubt that the election, THIS election is a valid one. 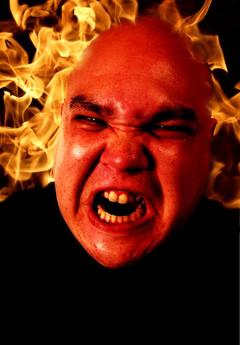 The astrology chart of election day 2020  tells as story: 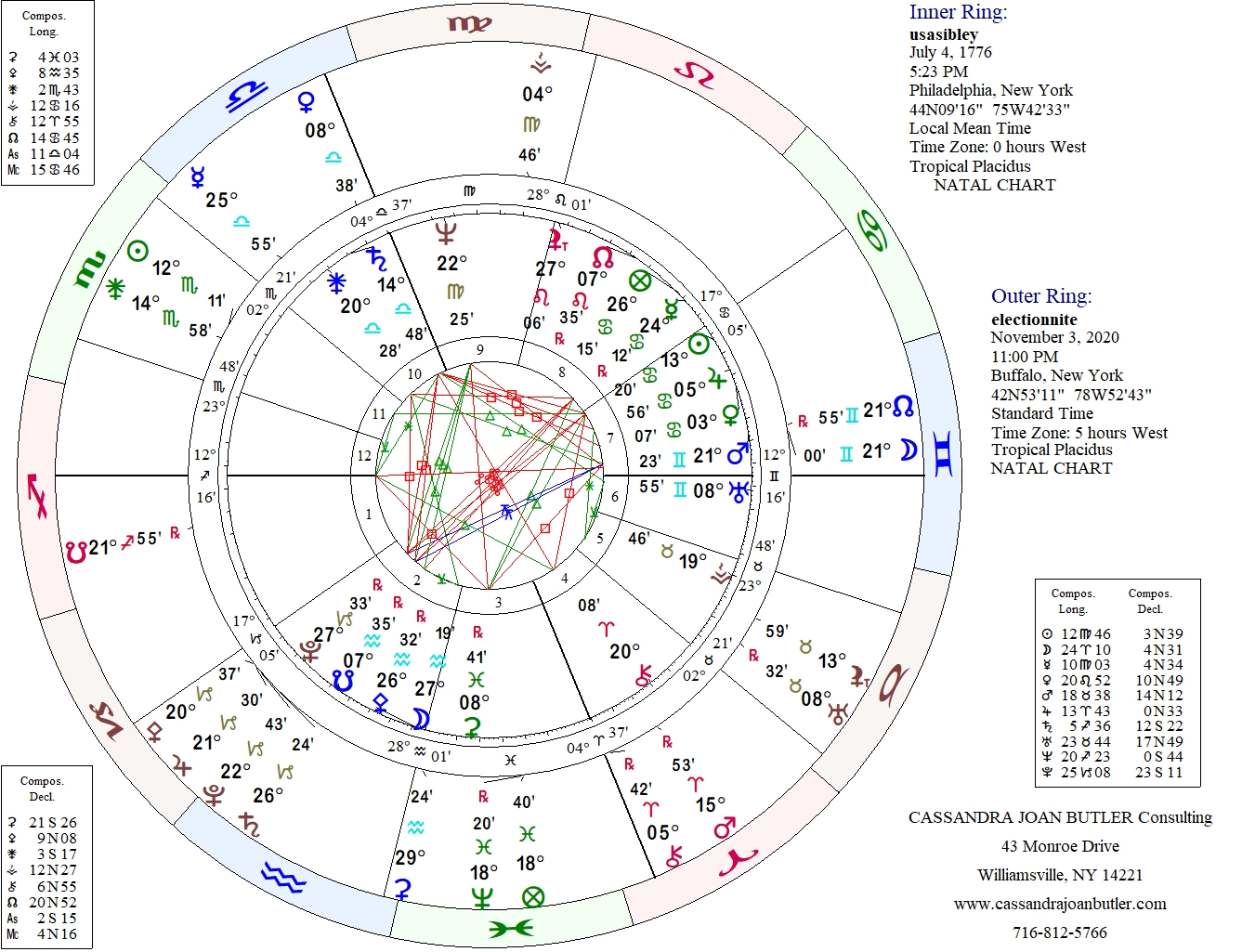 Three major themes emerge; 1) It fell three days after the powerful full moon of October 31st, a moon which conjunct Uranus EXACTLY in the stubborn sign of Taurus. Now, Uranus is the energy of `expect the unexpected’; 2) a mercury retrograde, which is associated with unusual re-dos concerning communications and communication tools; 3) Black moon Lilith EXACTLY opposite the Sun implying nefarious undertakings; 4) The conjunction of the Moon and the North Node EXACTLY on the US Mars,  at 11:05 pm in the house of `open enemies’. That incidentally was the time when President Trump was called to win the state of Florida and, it was conjunct his sun and destiny mark….exactly. 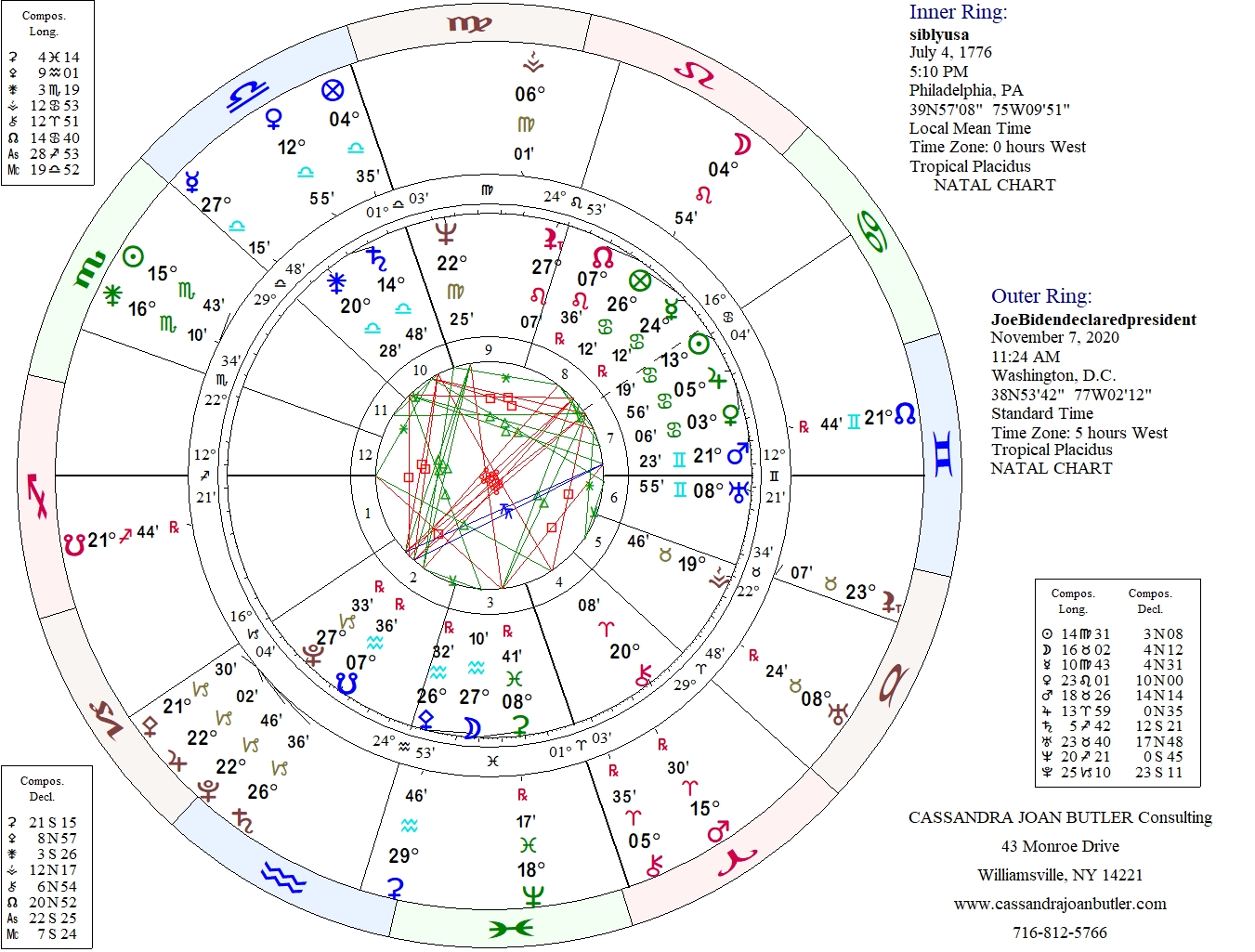 `Moments’ matter! The Sun and Juno light up the 11th house of the public heralding a new `partnership’ for the American people. Juno is the `good wife’ in astrology. Biden selected the ideal `political wife’ in Kamala Harris because her Gemini rising is the complimentary and opposite to Biden’s Sagittarius rising sign.

When we talk about `moments’ we turn to the moon. The moon is within orb to the north node, or `destiny ‘of the US chart. A simple statement would be that the USA destiny is being activated by the passing moon. Keep in mind that the destiny of the USA, at 7 degrees of Leo is that of an “activist stirring up revolutionary ideals.’ Yes, the USA will always be a country born of a revolution, and at the moment of Joe Biden’s declaration the destiny of the USA was indeed being `activated.’

The `exact degree at 11:24 am was 4 degrees of Leo. This degree is one of the `mourning’ degrees. The sabian symbol of this degree captures the highs and lows of `declaration moment’ as it is the degree of “Rock formations towering over a deep Canyon.”  From Lynda Hill: “ This can represent the gulf between you and where you want to be, it can show the need to just jump into the void, trusting that all will be okay, it is about seeing where you might have painted yourself into a corner, have your back against the wall, feel like you’re between a rock and a hard place. Jumping is most likely the right answer – what do you have to lose when your back is against the wall?

The acceptance of loss and allowing yourself to mourn the past (even if only for a minute or two) can move you past the past and into the future. As unknown as it can be, it at least promises that what is in front of you can be different from what is behind you”

So how are you feeling as reflected by this degree? 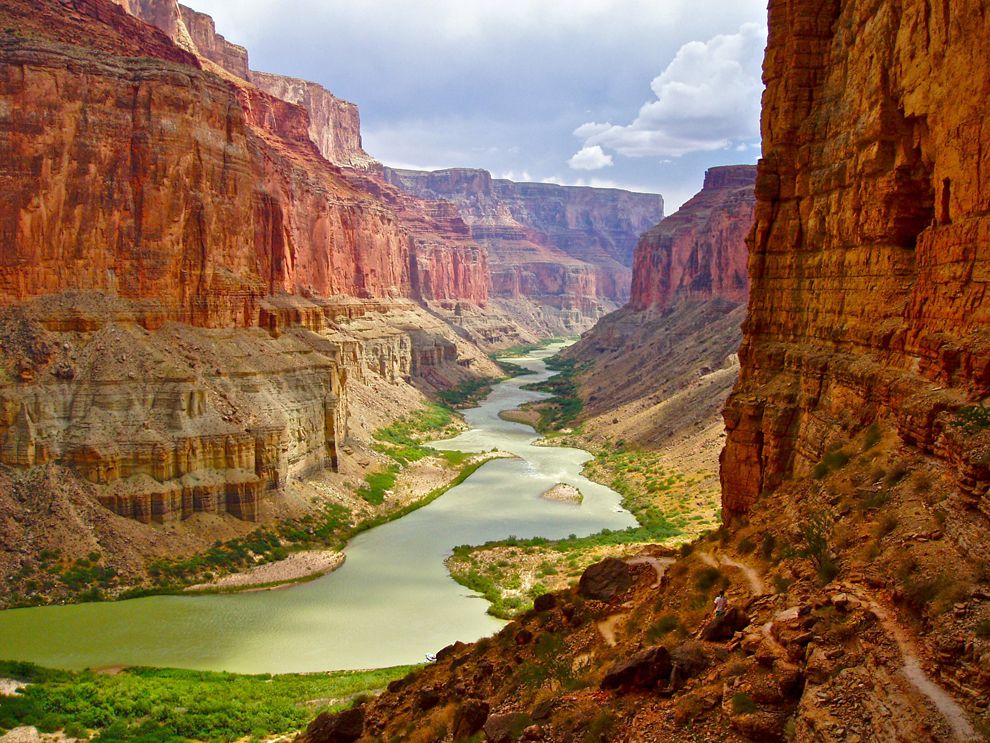 If you voted for Joe Biden you could be feeling washed with joy. On the other hand, the other 50% of are feeling crushed with a sense of defeat, as if in a deep canyon.

Beyond the moments offered by the `moon’ are longer timed transits which trigger a theme throughout a period. Remember this is the year of transformation! Everything we have experienced since 1/12/2020 has been under the umbrella of the major Capricorn line-up involving Saturn (limits) with Pluto (death and rebirth). The degree of the line-up then was at 22 degrees of Capricorn and is now revisited again, but with Jupiter and Pallas instead of Saturn in the lineup. Whoa! Consider this degree; “A soldier receiving two awards for bravery.” These degrees welcomed us to the new year in January and are alive and active now. Wherever you have 22 degrees of Capricorn in your chart pat yourself on your back for battling through this year with the courage of a dedicated dutiful soldier.

Whatever challenges came your way in 2020, ( above and beyond the election) this is the time to acknowledge your relevancy, personal authority and competence. And hopefully, we will all begin to glimpse a bit of the light from that mountain we have climbed. 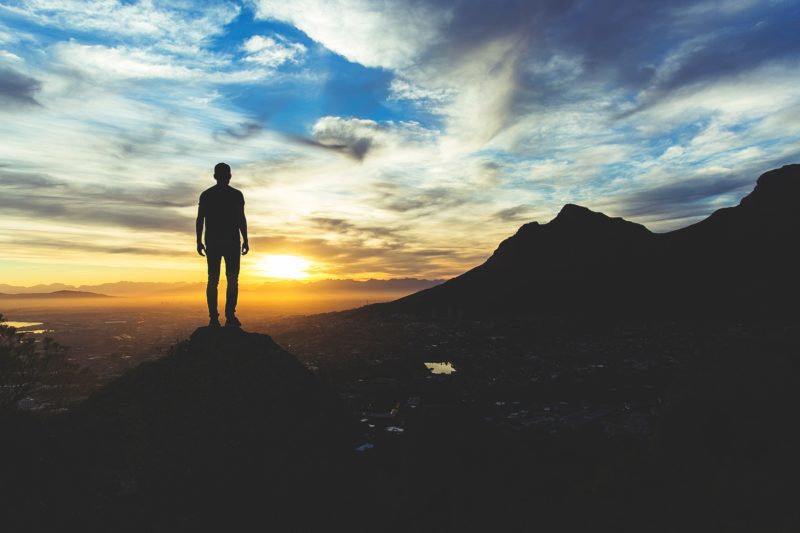